A Love Letter To My Car

Another man once said, "Sometimes I sit up at night and wonder how I ever got this far, but I guess I'll always pull out from under 'long as I got a car and guitar."

Okay, I was the second guy, but take a good look at your car. It's metal and rubber and plastic and glass. It's perfect, except for the human factor. That's why we make agreements amongst ourselves. We all stay on the same side of the road. We all stop and go at the same colored light.

There are also agreements we make within ourselves. Those are the agreements we break the most because we don't think there's anybody to call us on them.

"Character is who you are in the dark" are the immortal words uttered by Dr. Emilio Lizardo in the motion picture The Adventures Of Buckaroo Banzai Across The Eighth Dimension. It is the only movie of which I own a copy and the only movie I've ever tried to fashion my life after.

Character being what you are in the dark is probably one of the most significant self-awareness tools I have ever come across.

Every affect you have worked so hard to perfect is useless in the dark. There is no room for poseurs and wannabes. There are no coattails to grab and no rear ends to kiss. It's just you, baby, and the door out could be eight miles away or two inches behind you. That's why getting there is half the fun. 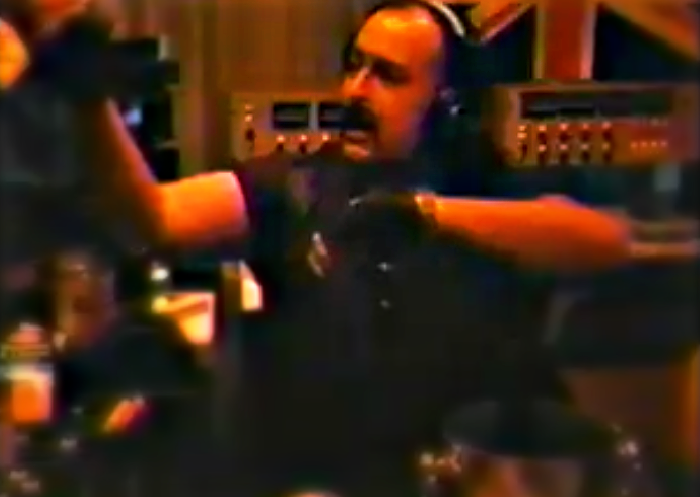 Back in the '60s, long before the twenty-something age and twenty-something job era (including becoming the greatest recreational director in the history of the Massachusetts Department of Mental Health), the first profession I ever envisioned was disk jockey.

I truly believe that mass communication reached its finest point in the first half of the twentieth century. There was radio and print, supplemented with the occasional phone call and telegram. The written word is probably the most amazing talent of our species. To think that someone could transfer their thoughts into little squiggles and, years later, recreate their 'voice' for a distant reader is tantamount to cosmic.

The only equivalent miracle was the ability to talk over great distances. I often wish that our mass communication technology stopped there. We would still have made it to the Moon. After all, Flash Gordon made it to Mongo.

When information retrieval requires more than one of your five senses there is a lessening in the quality of life. You become part of the machine. Sure, back then, there were the theater and movie houses. Yes, they involved a voluntary hostage-taking of your eyes and your ears for a voyeuristic escape. But these had built-in time restraints. In the era that followed, even television knew when it was time to go home. Remember test patterns? The national anthem?

These days, we are constantly teetering on the brink of a twenty-four hour cable/satellite/internet looking glass and the resulting couch potato syndrome is rampant. Maybe this is an example of what is referred to as the Gaia Effect, where Macro Organism Earth always has the last word when it comes to organization. In light of overpopulation, cathode tube catatonia could be a way of keeping everyone from bumping into one another. Either that or the government has found a way to keep us in a herd until the flying saucers can harvest us for the Chicken McNuggets that we really are.

Radio was the cultural oracle of my generation. It delivered a message and that message was music. No obligatory video and no increasingly rapid cinematography to hold its grasp on an ever decreasing attention span. We never even knew what the musicians looked like until we checked out the album cover. A concert hitting your town was right up there with major holidays and a free concert in the park was manna from heaven. Our guides and mentors were the disk jockeys.

They were the naturalists in an exploding Gadda Da Vida. They knew the bands and all their migratory patterns. The later the hour, the more time they had to talk. It was sometimes as much a treat to catch them emceeing a concert as the Mass that ensued. They were the keepers of the Holy Flame.

It was Horace Greeley Junior High Assembly Day, 1966, and our guest speaker was WABC's 'Cousin' Bruce Morrow. During the question and answer period, I raised my hand and was called upon. I asked Cousin Brucie what it was like where he worked. He responded by describing the office building that housed the radio station.

In retrospect, I should have said, in front of the entire student body, "Hey, I'm really interested in radio. Could I come down there sometime and watch you work? Hmmm? Huh?"

That brazen foot in the door ploy had more potential than even I could have imagined, as Morrow would later move to the legendary and way cool WNEW-FM.

In the years that followed several other crossroads eluded my grasp. The '80s, however, was a spaghetti bowl of pathways that eventually put me in touch with several radio types and, eventually, several radio gigs. I felt like the Mother Ship had retrieved its last lost crewmember.

When creative differences and upper management interference crept in, I attributed them to problems ingenious to that station and not the nature of a bigger beast.

By 1991, I had become a major personality at a major station in a major market. It was at that point I realized what the game had become. It was no longer the love of music or the love of radio as an art form. It was Arbitron, Q Ratings, consultants and, most of all, money. Radio had become a business as cut and dry as any firm on Wall Street.

Ninety percent of all disk jockeys were abused, overworked, underpaid and constantly in fear for their jobs. Playlists were determined weeks in advance by computers and freedom of speech had gone the way of vinyl. Listening to the radio was like listening to those censored, stiff upper lip tapes made by prisoners of war.

Throughout my life, I've pursued many a lover on a pedestal and I've seen them all crash in the flames of reality, But you never forget your first.