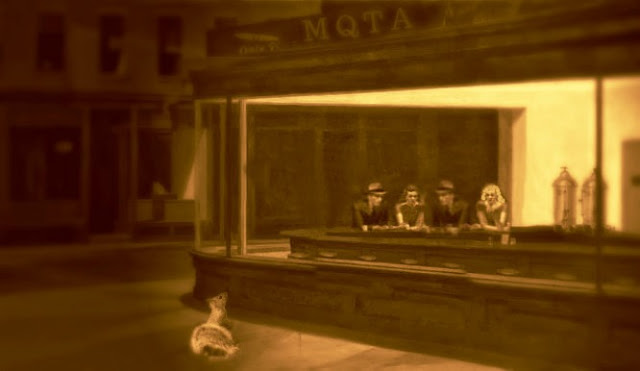 Q's:
Why are there now two men and two women sitting together instead of just one man and one woman?
Where's the guy who was always sitting at the counter with his back to us?
Where's the counter guy?
What's with the squirrel?
A's:

Because Adrian, Heather, Michelle, and Chad are two men and two women.
He took off without paying his check.
He went after the 'chew and screw'.
Oh, there's so much you need to learn...


and they only have an hour.


More Questions Than Answers with Adrian Lee
Fridays at 10 pm (Central Time)
on the
DARK MATTER DIGITAL NETWORK
Okay, I JUST invented a word:
BINGSTEN
It's short for binge listen. You have just witnessed history. Celebrate by BINGSTENING to past MQTA shows (for free!) on Soundcloud!
*****