Alice Through The Chess Clock 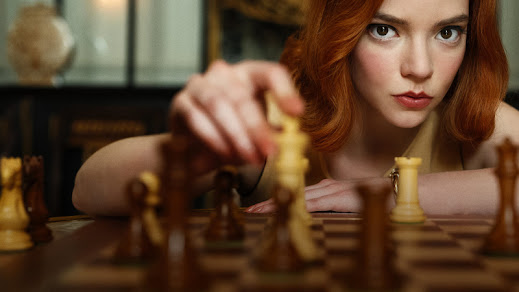 Alice Through The Chess Clock
by Heater Case

The British Invasion (the one in the 1960s) was just what rebellious boomers needed to escape the grasp of the suburban mindset. Anything English was cool,
except maybe the Rockers. We already had motorcycle gangs.
There were the Mods but they soon strayed from their OpArt Emma Peel/Lulu fashion statements and went through Grandma’s closet. Edwardian suits, paisley, and contrast color shirts were must-haves.           All of this was being devoured by the millions of young Americans in limbo between Haight-Ashbury and Levittown.
American media then created a teenage crush on Russian Culture. Doctor Zhivago, The Russians Are Coming, Illya Kuryakin, Pavel Chekov, Rudolf Nureyev, and anything else Russian was as fashionable as Carnaby Street.
Tiger Beat nation even embraced the arguably humorless and button-down world of chess, primarily through Bobby Fisher’s highly publicized jousts with Russian chessmasters.
Just like Cossack shirts, peasant dresses, and anything Russian found in Army-Navy stores, most of my comrades… err… classmates ran out to get chess sets and we quickly tried to wrap our brains around this cool and calculating lifeform that ate checkers for breakfast, lunch, and dinner.
We found out some of our friends were ringers who had grown up with the game. Some of us never got past making galloping noises with the Knight. Most of us retained the basic rules but only dusted off those neurons during blizzards, airport strandings, and, now, pandemics.
I wonder if Caissa’s Battlefield will once again become a popular fad in this land of PlayStations and GameBoys. The Queen’s Gambit, an engaging postcard from the edge of the chessboard, could just do the trick.
Beth Harmon (brought to life by the fantastic Anya Tayor-Joy) is the quirkiest femme fatale since Jodie Comer’s Villanelle in the BBC’s Killing Eve. As we follow Beth, a character as unorthodox, sympathetic, and complex as they come, we get thrown into the deep end of the game.
American life at that time was not as fun as it’s often portrayed. Beth’s enormous emotional baggage is in a perpetual tug of war with the main passion in her life.
Statistically, less than 14% of the chess players in the United States are women. Personally, I’d like to see a ‘C’ added to those STEM buttons.
The Queen’s Gambit can either inspire a whole new generation of enthusiasts or make them hide in the comfort zone of a good game of Battleship.